In 1888 five Jewish families, newly arrived in Schenectady from Russia and Lithuania, negotiated to bring a chazzan from New York City to lead High Holy Day services.  In 1892, Congregation Agudas Achim (community of brothers) became officially incorporated. The following year a beautiful building was constructed on Nott Terrace in downtown Schenectady. The congregation purchased the property for $6,000. Although founded as an Orthodox synagogue, in 1929 the congregation became affiliated with the Conservative movement. Members moved the bimah from the center to the front of the synagogue and mixed seating became the norm.  The minutes were then read in English instead of Yiddish.

As the congregation grew and members moved away from the downtown area, synagogue leaders decided to relocate to a more central location. Our Troy Road property was purchased in 1960 and in 1970 plans to construct a new synagogue building came to fruition. The longing to hold on to the memories from the original building inspired the installation of the Nott Terrace synagogue’s stained-glass windows, benches, bimah chairs, and ark into our small chapel. In 1976 Congregation Agudat Achim became fully egalitarian.  Girls could have Bat Mitzvot on Shabbat mornings, and women could have aliyot and also lead services.

Our congregation is known for many things: assisting in the resettlement of Russian Jews in 1991, adult B’nai mitzvah classes, Carrot Festival, As You Like It Catering, the Divine Kosher Cuisine cookbook, and our enthusiastic chanting of services. We continue to be a warm, welcoming egalitarian synagogue.

For more about our rich past, visit our history on display in the Michael Handelman Memorial Room. Thank you to Marsha Jaros, our synagogue archivist.

To learn more about our 120-year-old history; please click on the cover of  The Agudat Achim Chronicle below.

To learn about our 120-year-old history; please click the image here: 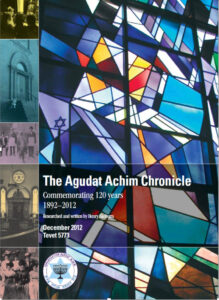